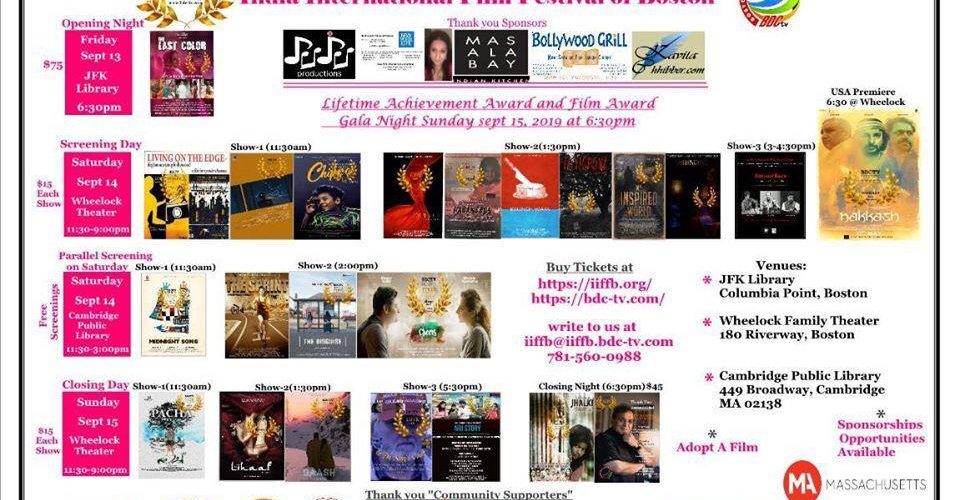 The India International Film Festival of Boston (IIFFB) is a three-day film festival that highlights independent filmmakers from South Asia. Razia Mashkoor, Founder of IIFFB said, “The Festival includes an opening night, closing day, and awards gala. IIFFB’s entire mission is to build cultural bridges to expand visibility and represent the inherent diversity of India through film“. TThe movies showcased in this Festival opened dialog on many social issues, still prevalent in our society, that have been challenged by our very own Sikh bequest since its inception. We also had the opportunity to open our minds to cultural idea exchanges via these films. Nishkam TV’s sister production house- Film Neev also received special recognition for their movie – In the King’s court.

The first day of the India International Film Festival of Boston set the stage for a weekend of creative films made by influential filmmakers. Over the three days, the diverse palette of the film festival ranged from powerful films such as The Last Color, Nakaash, and Jhalki along with our own Film Neev’s In the King’s Court. This Festival helped that by offering a stage for films that have a message that deserves to be shared with a broad audience. During the Festival, the topics presented in the films encouraged discussions leaning towards various social issues.

The Nishkam TV crew was fortunate enough to interview influential professionals such as Master Chef Vikas Khanna and Meghna Ghai Puri – President of Whistling Woods International. The lifetime achievement award went to Subhash Ghai, who is the father of Meghna Ghai Puri. Nishkam TV also had the pleasure of interviewing Kavita A. Chibber (a journalist, Vastu expert, and energy healer), Dr. Manju Seth (the host of Chai with Manju), Zaighaam Imam (the director of the film Nakaash), Rohit M. Chandra (programming team member of IIFFB), and Sri Mirajakar who is an actor, writer, and a director of Habaneros.

Our young storytellers and filmmakers of Film Neev and Nishkam TV gained the unique knowledge of what it truly takes to display a powerful message in the present world of quality media and content. Harbaldeep Singh, Founder and mentor of Film Neev along with Gurleen Kaur, Siddhak Singh, and Navpreet Singh were called on the stage to be honored for their hard work put to display the underlying theme of the film: that it is important to respect the beliefs and values of all religions and their institutions. The selection of this film proved that perseverance and a strong work ethic could lead to more immense unimaginable strides with what once may have started as a small film school created to bring together a community sharing similar passions. IIFFB is most definitely a unique event that can be remembered as a rewarding achievement.

The films shown throughout the Festival surrounded social or political topics such as Trump’s presidency, unfair treatment of widows & transgender people, and child slavery in India. In the King’s Court is about Trump visiting a Gurdwara or Sikh place of worship and is explained by kids why it is disrespectful to wear a hat and the importance of Seva or selfless service. “The Last Color” surrounds the story of the relationship between a young 9-year-old tightrope walker named Choti and of a shunned and the neglected widow who is socially outcast due to the ritualistic practices in Varanasi, India. Jhalki follows a little girl who tries to get her 7-year old brother back after he is pulled into human trafficking and child labor.

These eye-opening films created an atmosphere of curiosity and appreciation where the audience became invested in asking the creators of the movies many questions. The creators were extremely susceptible and touched upon valuable information that can be incorporated into any film created by a young or experienced filmmaker in the future. Television channels, celebrities, and local filmmakers gathered to celebrate diversity and engage in culture-related conversations through the art of filmmaking. Like-minded individuals received the platform to connect, find common ground, and build long-standing relationships.

Overall, it is inspiring to see a film festival created where the focus is to tell stories on topics that may not be talked about easily or frequently and recognize the creators that are shedding light through films with outstanding stories. Unique stories such as these continue to live on and start meaningful conversations that can lead to social or political change.

Special thanks to Razia Mashkoor, Suhaib Siddiqi, Rohit Chandra, Sunayana Kachroo, Kavita Chibber, Manju Sheth and the entire IIFFB team for offering an experience with moments that will always look back on and admired forever.