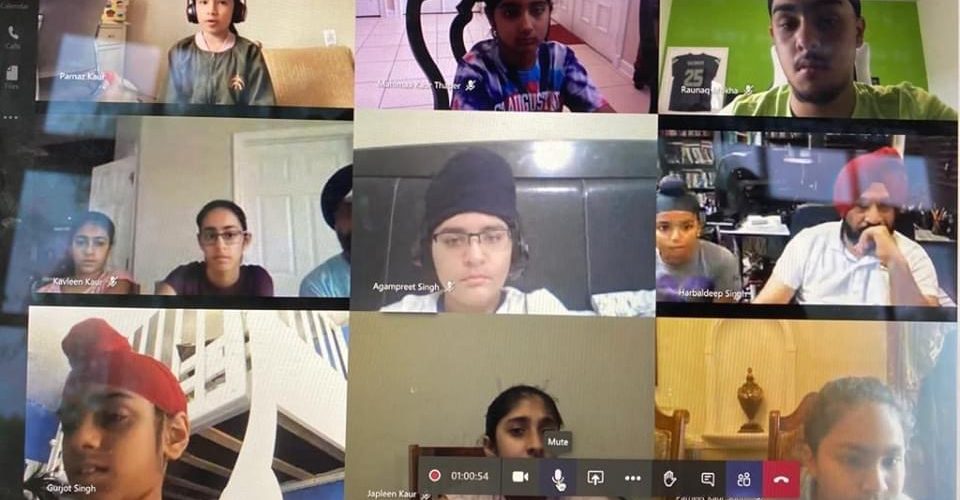 During these unprecedented times, where we are looking for innovative ways to engage the Sangat, Nishkam TV has started a new initiative -  A Virtual Filmmaking camp for kids. This virtual camp is an outcome of the Sikh Coalition’s Webinar held in June 2020. Harbaldeep Singh, the founder, and mentor of Nishkam TV was the speaker in this webinar.

The Virtual Filmmaking camp classes commenced on June 27th, and are held on all weekends for 12 weeks. There are six teams participating in this virtual workshop, four teams are from Florida, one team from Boston, and one from California. Each team has its own coordinator (parents) and TA (kids). There is a wide variety of ages, from seven-year-olds all the way until sixteen-year-olds. The official name for it is “Nishkam TV BFC 2020 Film Making Workshop”, BFC being the acronym for the first letters of all three states participating. This virtual film making workshop is bringing together young filmmakers  from Florida, California, and Boston.

This workshop teaches the basics of film making, and each team will create a five-minute film about a Sikhi topic using the skills they learn during the workshop. Harbaldeep Singh leads this workshop along with the help of the six TAs. The TAs include Raunaq Singh Mokha, Aekem Deep Singh, Rajvir Singh, Sahej Singh, Tanisha Kaur, and Jaskeerat Singh – all members of our Westborough  Gurdwara Sangat. Rajni Singh is the project manager for this workshop. The coordinator of our Boston team is Amanpreet Khurana, who is very involved with Nishkam TV. During these classes, students learn about the camera- aperture, shutter speed, ISO, white balance, composing a shot, framing, and everything about lighting, including 3-point lighting, color temperature, and shooting during a magic hour. After learning all of this, each team will create their script and shoot a short film about a Sikhi topic of their choice.

At the end of the workshop, the plan is to have a virtual red carpet, showcasing each of the team’s films. This is a great way to showcase the hard work and progress of all these kids and their teams. This virtual workshop is a unique way to teach and prepare young filmmakers from all over the USA.