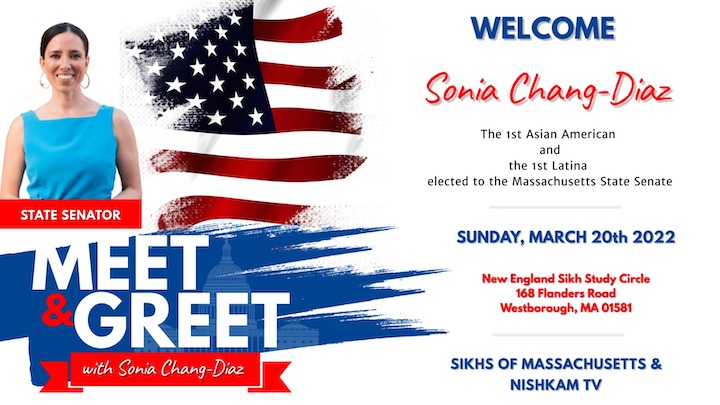 Former public school teacher and the first Latina and Asian-American woman in the Massachusetts State Senate, Chang-Díaz took a tour of the Gurdwara and later gave a speech to the Sikh congregation. Chang Díaz was joined by members of the Westborough Police Department Chief Jeffrey Lourie, Lt. Michael Daniels, and Deputy Chief Todd Minardi.

Chang-Díaz first visited the on-premises Sunday Khalsa school, where she received a handmade gift from the Sikh children, an intricately crafted Khanda, the symbol of the Sikh faith. In this Sunday school, 120+ Sikh children are taught about the Punjabi language (the Gurmukhi script), the history of the Sikhs, and traditional hymns, by parents and community volunteers. Chang-Díaz raised the importance of teaching about the history of one’s community.

“For me, it has been tremendously important as an organizer to be grounded in the history of people who broke down barriers before me, whether they be those that I have known personally like my father, or others, like Harriet Tubman, who came long before me but have done things way harder than what I might be tackling; it helps to give me the juice to keep fighting,” Chang-Díaz said.

According to Chang-Díaz, not only should we learn from the past but also continue to highlight the good outcomes.

“Learning both the wisdom from the past and difficulties that our own communities or other communities have survived through is very important; we should recognize mistakes from the past that we need to learn from, but also the richness of our ancestors before us and the things we want to carry forward,” Chang-Díaz said.

While addressing the Sikh congregation, Chang-Díaz spoke about the importance of electing leaders that will push for change. Chang-Díaz believes that with the right leadership, real change can be achieved, as she has seen it firsthand with the Student Opportunity Act of 2019, which provided $1.5 billion of progressive funding for K-12 public schools.

“If we can get our education system right, we can take a huge bite out of poverty, violence in our community, and build up sustaining our democracy,” Chang-Díaz said. “[The Student Opportunity Act of 2019] is a game-changer for the education system and closing gaps created by economic and racial inequality.”

Following her speech to the congregation, she was interviewed by Nishkam TV (www.nishkam.tv) students, the world’s first Sikh Digital channel run by Khalsa school students. She spoke about her future plans if elected governor regarding education and public transportation COVID-19 and healthcare, affordable housing, and the environment.

Being part of a minority herself, Chang-Díaz hopes to bring justice to other minorities.

“The solidarity building across immigrant communities is so important, and we are stronger when we work in coalition with one another,” Chang-Díaz said. “Seeing the contributions that immigrant communities have made for generations to this state and are still making to this very day, it is important to see and acknowledge those contributions and speak them out in response to much of the hatred directed at immigrants and other minorities. The best way to counter that is not to ignore it, but by offering a positive solution and lifting up communities’ contributions so that they are seen before the hate speech comes up.”

Following the interview, Chang-Díaz concluded her time at the Gurdwara by learning about the significance of the concept of Langar, a free meal that the Gurdwara serves to the congregation explained by NESSC Khalsa School teacher assistants, two high schoolers, and enjoyed the meal alongside them.