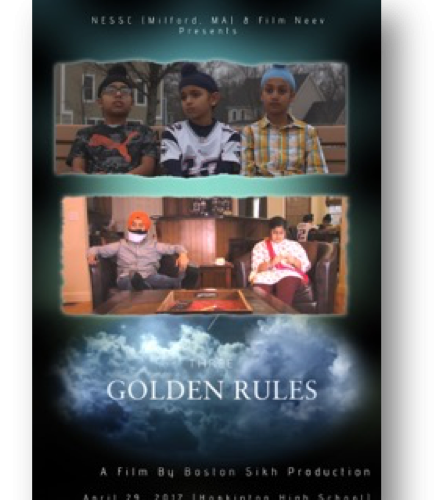 Before Nishkam TV officially started, there was only Film Neev. During this, kids learned about the art of filmmaking including script writing, production, and editing. One of the many films Film Neev produced is called  “Three Golden Rules”. This film is based on the three tenets of Sikhism – Remembering God, Sharing what you have with others, and Earning a living through honest means and hard work.

Three Golden Rules was produced by Film Neev’s Boston Sikh Productions. This is a 13:55 minute short film and  features – Raunaq SIngh Mokha, Aekem Deep Singh, Harman Singh, Rajvir Singh Kalra and Tanisha Kaur Kapoor. The plot of Three Golden Rules revolved around  three brothers who start a lemonade stand to get enough money to buy a new game console. Although they do get enough money, they end up spending it on something else. What happened to that money, the dilemma they faced, and the decision they made based on their Sikh learning’s was a premise of this film.

Three Golden Rules was one of the top 20 films that were selected in the second Annual Short Film Festival held in Chelmsford, presented by Chelmsford Media. This festival was held on August 29, 2020 at the football parking lot of Chelmsford High School. The 20 shortlisted films were picked out of hundreds in New England, and they range in duration from 50 seconds to 20 minutes. The creators of these films ranged from middle school kids aided by adults to college level kids.  Originally, the festival was supposed to take place in Chelmsford Center for the Arts, but due to the ongoing pandemic and social distancing,  they had to do things a little differently. After consulting different people in the town they decided that the best way to hold the festival would be through a drive-in screening. Many safety rules were put into place like masks were required, sitting outside of the cars was not allowed, and others. But this didn’t stop the festival from being an enjoyable experience for everyone.

“Three Golden Rules” ended up winning the Audience Choice Award and a cash prize money of $250.  Congratulations to the entire team and cast of Boston Sikh Productions and Film Neev.