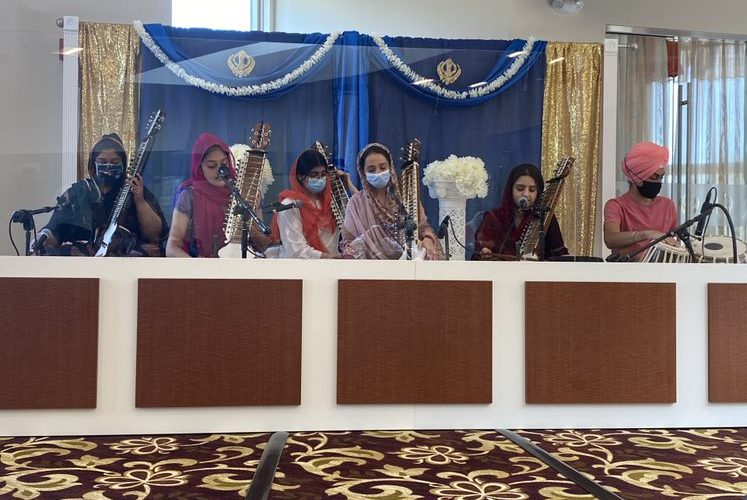 Why call her bad, from whom are born the king.

From a woman, a woman is born, Without a woman, there, can be none.

On May 9th, 2021, where everyone in the U.S. celebrated Mother’s Day, the Sangat in Westborough Gurudwara Sahib also celebrated and thanked the mothers and the entire womankind with full vigor. We dedicated this day especially to mothers like Mata Gujri Ji and Mata Sahib Kaur Ji, to whom we owe our existence. The Day was marked as “Kaur Day.” The entire Diwan on May 9th was run by all Kaurs (used for girls, meaning Princess) starting from Sehaj Paath (recitation of the holy texts), Bhog (to conclude), and Ardaas (a Sikh prayer). Hukumnama (royal decree) and then starting of new Sehaij Paath.

After the start of the Sehaij Paath, the Kirtan program commenced with little Kaurs reciting Shabads and playing the Tabla (a pair of twin hand drums). A number of Kaurs sang the praises of Waheguru throughout the morning. The stage was also graced by a Shabad recited using Dilruba – a string instrument that is a cross between the Sitar and Sarangi that was invented by the Sikh Gurus and is more than 300 years old. A group of Five Kaurs beautifully sang “Raakha Ek Hamara Swami” while playing the Dilruba.

The Kaur Day Diwan concluded with Ardaas and Hukumnama with translation of Hukumnama in English, also recited by Kaurs. The day was full of bliss and the Sangat look forward to many such programs with Kaurs partaking more in every aspect of the Diwans.