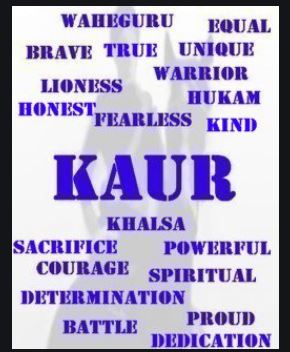 THE KAURS OF MODERN ERA

In the modern era and 21st century, many Sikh people, including men (Singhs), women (Kaurs), and children have impacted society and done things that have not been done before. Many brave and resilient Sikh women have been on the forefront of major revolutions and other activities that have broken the traditional stereotype norm of “only men can do certain things”. Sikh women, also referred to as Kaurs by our Gurus have done a number of achievements and their actions have been impactful on the life of every human being in today’s life, while following the tenets of Sikhi.

One such example of Kaur whose courage and effort lit a fire of revolution against the British Empire was Maharani Jind Kaur.

Maharani Jind Kaur was the youngest wife of the first Maharaja for Sikh Empire, Ranjit Singh, and the mother of the last Maharaja Duleep Singh. She instilled fear in the British Regime with her rebellion and her fearless standing up to them. Maharani Jind Kaur’s gaining popularity forced them to imprison her. The Britishers called her “The Messalina of the Punjab”. She died in England after reuniting with her son. Her courage and persistence were one of the starting points to many revolutions led by other women to regain independence for India from Britain.

Sikhism teaches us to help others in need, and everyone is equal in the eyes of God. Kaurs have followed those teachings and exercised them for the good of society. Doctor Inderjit Kaur has set that example.

Sikh women have always stood up to weaknesses and profiling in our society regarding race, religion, the color of one’s skin, and other sensitive topics. One of the Kaurs who took that initiative is Valarie Kaur, who has also done something profound to help society.

Valarie Kaur was born in a Sikh family in California, USA. After the events of September 11th, her friend Balbir Singh Sodhi was killed in a hate crime. She then started documenting these crimes and eventually made a documentary about it. The documentary, which was called “Divided We fall: Americans In the Aftermath”, was an awarded documentary. Valarie Kaur continued to make films and be active, focused on gun violence prevention, racial profiling, and other things such as the New York Stop and Frisk Policy. She has raised so much awareness in society and the world regarding these underlying issues and has helped enormously to bring to light what can be done to fight against them, which is eating our society inside out.

Another Kaur in the 21st century is Anmol Narang, the first Sikh woman to graduate from West Point Military Academy in this year’s class of 2020.

Even when Sikh men and women face huge obstacles going to military schools in the United States of America, it didn’t stop Anmol Narang from pursuing her dream of serving the country without compromising her religious beliefs, identity, and faith. Second Lieutenant Anmol Narang has paved the way for other Sikh women to pursue similar dreams by becoming a role model.

Kaurs have followed our Guru’s teaching and have had big achievements in life, which have made a strong and long-lasting impact on our society and the world. These initiatives can never be forgotten and have set the bar high for today’s and future generations. These Kaurs are just a few examples out of many, many more Kaurs in the world who have made a long-lasting impact on society. These KAURS have and will continue on this path of achieving goals of doing well for society while keeping their faith intact.