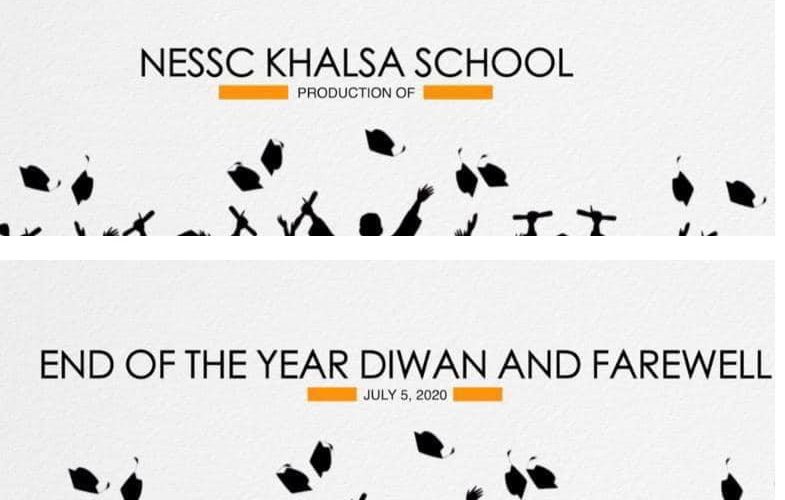 New England Sikh Study Circle (NESSC)  in collaboration with Nishkam TV, presented its year-end virtual NESSC Khalsa School Kids Diwan on July 5th, 2020. It also held its first virtual Graduation ceremony in honor of the students who have graduated. In this program, the NESSC Khalsa School Admin team took everyone down the memory lane as it reached a milestone of 20 years.

The program started with a review of the goals of Khalsa School, presented by Manpreet Soin. This segment focused on the goals for both Sikh History and Punjabi classes. Khalsa school hopes to have students be able to explain their religion as well as be able to read and understand Bani. Then the program went on to explain the changes Khalsa School has gone through, from the physical model of the school to modifications in the curriculum itself. Then Jaswinder Kaur explained the major accomplishments and challenges of Khalsa School. The program continued and Gurpreet Kaur explained the details of all the Khalsa School Financials.

Subsequently, the program talked about Graduating seniors. This year seven Teacher Assistants (TA) are graduating and going to colleges. So NESSC Khalsa school and Nishkam TV took this opportunity to show how much they all appreciate the Seva done by these kids.  The following TA’s were honored: Amneet Singh, Amandeep Sohal, Harneet Kaur, Harnidh Kaur, Mehr Kaur, Navnit Singh, and Sahib Sandhu. These students have been part of Khalsa school for as long as they can remember. Being able to still celebrate their knowledge during an unprecedented time like this was truly remarkable. The students received a small gift from NESSC as well as video messages from their Khalsa School teachers, congratulating them on their success in the understanding of Sikhi. TA’s also shared their experiences via video messages.

Due to the ongoing pandemic, Khalsa school has resorted to organizing fully remote classes for the year 2020-2021. Although it is very different from past years, NESSC has succeeded in making sure every student participates in a class similar to in person schooling earlier this year. On September 20th, Khalsa School started its first round of classes for the new session. Prior to the class, the students have received their books and other study material.

Nishkam TV is born out of NESSC Khalsa School. On behalf of our entire team, Nishkam TV would like to congratulate Khalsa School students going to college and Admins/Teachers/Parents for their volunteer hours to make this school an example of Sikhi Education in the last 20 years.